Komotion International was an artist collective and performance space in San Francisco’s Mission District from 1985-1995. It was founded by Robin Balliger (and Big City), Mat Callahan (and The Looters), and members of Bedlam Rovers. Also involved in running the space were A Subtle Plague, Josef Brinckmann, Lil’ Mike, Jeff Mann, Claude Palmer, Mary Liz Thomson, Celeste Conner, and many others. Komotion was semi-legal and operated on all-volunteer labor. Our activities included producing shows with live music, dance, spoken word, and a small art gallery. We had a rehearsal space, a recording studio, and we published a sound magazine that included live recordings from the space. We also fed people. Over those ten years we organized hundreds of shows that included artists, musicians, dancers, and poets from all over the world. Most of the events were benefits – typically for marginal, but socially important organizations that we supported. We did benefits for needle exchange programs before they were legal. Many of the founding members were influenced by a punk DIY approach and were inspired by international music and political movements. Komotion started in the 1980s, during the reactionary politics of Reagan, the Contras in Central America, the Cold War, and later, the first Gulf War. This was also a period of frequent and lively political demonstrations in SF, including AIDS activism, and we were inspired by semi-autonomous communities in Berlin-Kreuzberg, Germany, and elsewhere. Much of our motivation came from the political energy of this historical moment, uprisings that we supported and connected with, and from like-minded people who found us. 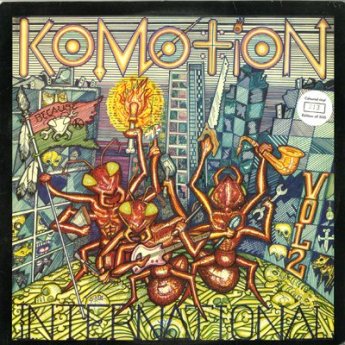 Like reaching out to diverse communities of people, when we organized shows we often mixed different artistic genres in a single evening to challenge audiences with new experiences and to build new relationships. We organized many “theme” nights like a “Moroccan Café,” with films, live music, Middle Eastern food and mint tea. This created a dynamic space, because you didn’t just have visual artists attending galleries, or musicians playing nightclubs. For example, we would combine MDC and Buñuel films on the same night. Bands from all over the world played at Komotion, including the Soviet Union, Nicaragua, Mexico, the Philippines, and Europe. Many local groups later became famous, like Primus, Green Day, Michael Franti, and Jim Campilongo. Writers and spoken word artists included John Trudell, Margot Pepper, Alphonso Texidor, Alejandro Murguía, and Hakim Bey gave a lecture on the Temporary Autonomous Zone which drew 300 people. We also released two compilation albums.

It’s impossible to summarize ten years of activity; see the Komotion archive for sound magazines and recordings, and the list of 900 performers.

Komotion had a major run-in with the cops in 1992 during a benefit for Gilman Street Project (Berkeley). It started with a prank, when a young punk pulled a fire alarm on the corner. There were 200-300 people at the show when the police arrived. The crowd spilled out into the street and a minor riot ensued. After that incident, we had to change strategies and shift towards legality. We officially became nonprofit, a project of Bay Area Center for Art and Technology (BACAT), which later morphed into Counterpulse! We also tried to meet building codes as much as possible, but by 1994 it became clear that we couldn’t comply with the fire code and zoning issues. Although the one-story building did have a second exit, it turned out that the easement between our building and the next was 6 inches too narrow – and that was the end. Were we shut down for “political” reasons? On the surface it appears not, but control over space and activities also means control over ideas.